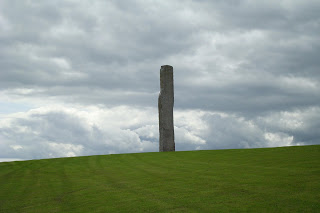 Musketeer Engineering was involved in one of Northern Ireland's most high profile millennium projects - the erection of the Strangford Stone at Delamont County Park, near Killyleagh, which involved 1,000 young people on the day and 2,000 people in the project overall.

Essentially, the Strangford Stone is a huge piece of granite, 12 metres in height, 50 tonnes in weight and removed from the Mournes in one single piece. It was decided to erect the Stone as a millennium monument. The hydraulics Musketeer provided were to control and ensure the safe lifting of the pillar, which was physically hoisted into position by the sheer strength of 1,000 young volunteers pulling on ropes. It was a magnificent spectacle and a project that we are very pleased and proud to have participated in, albeit that human muscle power rather than hydraulic power actually did the hard work! The following day, our hydraulics were used to rotate the supporting framework away from the Stone to leave it standing on its own.